"Mike McClellan is a national asset"

When Song and Danceman was released in 1974 Mike McClellan was already an established performer on the acoustic music scene.  That song topped the charts bringing him national recognition and a following that has remained loyal to his highly personal brand of music for over 40 years.  For those who had already experienced his talent his first hit single did no more than reinforce what they already knew: that he was one of the best songwriters to emerge from this country in many years and among its most talented singer/guitarists.

He had began performing in the late 60’s and released his first album, titled simply Mike McClellan in 1972.  It was regarded as one of the most auspicious debut albums from any writer/singer of his era.  He toured extensively for the next 2 years playing the songs and previewing the material that would make up his breakthrough record.

His second album, Ask Any Dancer went Gold and Song and Danceman was voted Song of the Year at the Annual Music Industry Awards in February 1975.  He hit the cover of every magazine in the country and played concerts from Darwin to Tasmania.  It hardly needs repeating that Song and Danceman has become an Australian classic having been recorded many times, both here and overseas.

Tours with such performers as Roger Miller, Melanie, Dr. Hook, The Hollies and Leo Kottke expanded his audience even further and he earned rave reviews for his capacity to hold his own in the company of such internationally recognised stars.  That recognition took a giant leap forward when Rick Nelson recorded one of his most acclaimed songs, Rock’n Roll Lady, in 1975 and John Farnham covered Saturday Dance.

1976 saw the release of what many regard as his finest album of the 70’s - Until the Song is Done.  The Gamble topped the country charts and Lovers Never Wind up Friends and Midnight Flight were covered overseas.

It was inevitable that he would record a live album.  For alone on stage with just a guitar there was a magic that couldn’t be easily captured in the studio.  An Evening With Mike McClellan was released in 1978 and included some of his most requested concert tunes, among them several brilliant demonstrations of his unique guitar playing.

1979 saw him compering his first television series National Star Quest which lead to his being asked to take over the highly successful ABC program Country Road.  Within a year it became Mike McClellan’s Country Music and he continued to present the show for a further 3 years, touring extensively behind the national profile it sustained for him.

1980 marked a change in direction.  He parted company with EMI and, working with Harry Vanda and George Young of the Easybeats, released Laughing in the Dark on the Albert’s label.  It became his second gold album on the strength of the single The One I Love.  One of his most requested songs, it joined the growing list of McClellan classics and was covered many times internationally.

1982 took him overseas to the UK and America.  He was away for 12 months, gathering enthusiastic reviews wherever he played and establishing valuable contact with international publishers.

His return to Australia in ‘83 marked another change in his career.  Weary of the constant traveling he sought more stability for he and his family.  Mojo, then regarded as the most dynamic ad agency in the country, persuaded him to write for them.  For 2 years he contributed some of the most memorable advertising on television, writing the concepts, words and music for clients such as Australian Airlines, Red Rooster, Channel 9 and growing the already established XXXX and Tooheys campaigns for the agency.  Invigorated by new challenges he and a partner left Mojo and set up their own agency which they called Kazoo.  It grew rapidly over the period from ‘86 to ‘91.  The 2 partners became 3, the staff went from 3 to 30 and the billings through the roof.

Through all the demands on his time he still managed to release a new album in 1990.  The Heartland is considered by many who know his work to be as good as anything he has recorded and marked a return to the EMI label.

He subsequently sold his share holding in Kazoo to re-establish Mike McClellan Pty Ltd and take complete control of his own destiny once more.  He needed the time to write for himself and take advantage of the dramatic changes that had been happening in the communications industry.

1998 marked the release of a single commissioned for Warner Music.  But the three songs it contained were a little different to past McClellan discs.  They were tributes to three great Australian sportsmen, Mark Taylor, the much-admired former Aussie cricket captain, the great Sir Donald Bradman, and David Campese, often called “the Bradman of Rugby.”

Late 2001 saw the release of a comprehensive retrospective of his recording career.  Personally chosen and carefully remastered from the original tapes Time. And Time Again is a double CD containing 35 of his best songs.  Among them are re-recordings of two from his very first album, a studio version of California Cool that was only ever released as a B side on a single and New York City Blues, a never before released gem that was recorded during the sessions for The Heartland CD but didn’t fit comfortably with the other songs.

Late 2001 also saw the first of what were standout concerts with his old friends Kevin Johnson (who wrote Rock’n Roll I Gave You All The Best Years of My Life) and Doug Ashdown (Winter In America).  A sell out crowd at Sydney’s Basement and a standing ovation said it all – “Their artistic and intelligent acoustic alchemy had a capacity house singing, stamping and tingling beyond the witching hour.  A night indelibly imprinted”, said Glenn A. Baker.

In 2005, in conjunction with Andrew Pattison, who established Melbourne’s premier acoustic venue the Troubadour, he brought to Australia and shared the bill with the wonderful US singer/songwriter Danny O’Keefe.  The concert crowds reinforced his belief that there was still a sizable, enthusiastic audience in Australia for acoustic music of depth, conviction and real quality.

Mike was, for 6 years, a senior tutor at the CMAA Country Music Academy in Tamworth and is a Senior Visiting Fellow at the Australian International Conservatorium of Music where he taught a course in song writing.  Ironically, after many, many years his original training as a school teacher is being put to good use once again and his song writing workshops have become an important part of his creative life.

2011 saw the release of his first album of new songs in 20 years and a return to full time recording and touring.  In reviewing it for Country Update Pat Drummond called it "a stunning new CD. In the context of a long and illustrious career this is a very special album.... for one of Australia's most influential country/folk legends."

Mike took to the road again in 2011 playing concerts across the country to standing ovations.  As a performer he just seems to get better with time and it is a tribute to his talent that many in his audiences have been coming to see him sing for well over 40 years.  Then, 40 years after Song and Danceman hit the charts he released Dancing In The Rain.  Produced by Matt Fell it includes a wonderful remake of his original hit and a collection of new songs as compelling as any he has written. Indeed many said at the time that it may be the best collection of songs he has ever recorded.

2015 saw him return for the first time in many years to the US where he has concluded a new publishing deal and played one of the largest regional acoustic conferences in Iowa to very enthusiastic reviews.  He went back in 2016, to play the Folk Alliance International Conference in Kansas City where he was an official showcase artist.  2,500 delegates gathered from all over the world and it is very likely that he will receive invitations to play festivals in Canada and the US in 2017.  A return to Ireland is also scheduled after he played a concert in a small pub just out of Cork in August of 2016 and blew away an audience who knew nothing of his music or reputation.

Reviewing one of Mike’s Troubadour performances for the Melbourne Age some years ago Age journalist Paul Speelman wrote, “McClellan is a national asset”.  His 2011 CD, If only for a moment… only added to his reputation as one of our finest singer songwriters.  Dancing In The Rain, further enhanced what was already an exceptional body of work from this legendary performer.

And then, in July 2017 came No Intermission.  Reviewing the album Steve Britt in Rythms magazine wrote, "I regard this album as the strongest of his latter day albums and easily the equal of his 70s work."  Given the acclaim with which his recent two albums of new material were greeted and the outstanding quality of his early work that's quite a statement.  To which Steve added, "McClellan is still the consummate performer – a wonderful singer, guitar player and songwriter who keeps the audience in the palm of his hand. Don’t miss No Intermission or McClellan himself if he is playing near you."

That last quote just about says it all. 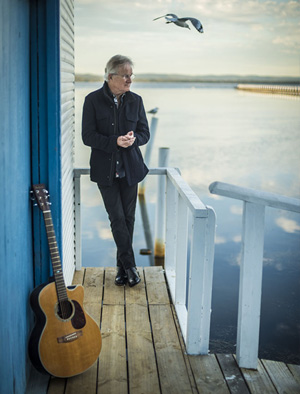